Who knew that one of the smallest countries in Europe would be one of the largest wine producers in the world? Like other European countries, Portugal is entirely within the 30 ° and 50 ° latitudes, the region of the planet that has the most suitable conditions for the growth and development of Vitis vinifera, the grape which the drink is produced from.

According to data from the Wine Institute, Portugal has 180,000 acres of its territory inherent in wine production. In addition to supplying the large domestic consumer market, Portuguese wines are appreciated worldwide.

If you are in Portugal and are having difficulties in choosing a wine for your meals, we have created a small guide that briefly explains the different wine regions (the best) in Portugal and the most common tastes to the wines of each of them! 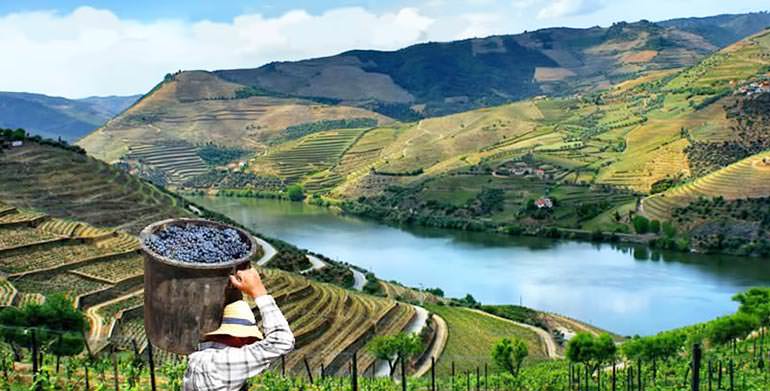 DOURO, the region, Porto wine and the first Authenticity Designation of Portugal

Wherever in the world you are reading this from, you have probably already heard about Porto Wine. The famous Portuguese fortified wine arose with the need to conserve the drink that was destined for England and that needed to travel a long way through the Douro River and the Ocean to get there. That is why it was fortified with aguardente (brandy made from the grape marc). This increase in the drink’s popularity brought with it the problem of counterfeiting, which was solved with the creation of the first Authenticity Designation in history in 1756 (by the Marquis of Pombal), calling the true origin of Port Wine.

The region, classified as World Heritage by UNESCO, is characterized by the landscape of terraces along the valley of the Douro River, an ancient and very efficient form of cultivation. The soil of the terroir is granite and rich in schist, which leads the vines to create deep roots, sometimes about 30 meters deep, where, in addition to Porto Wine, unfortified White and Red Douro wines are also produced. The first is characterized by being thin, light, fresh and aromatic, while the second is velvety, rich in colour and aroma, and still ages in a noble way. 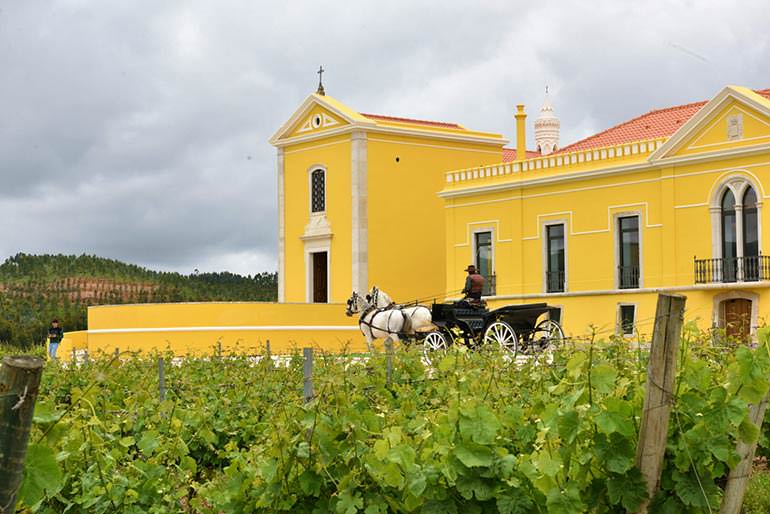 With a temperate Mediterranean climate, with reduced thermal amplitude and some humidity manipulated by the Tagus River and protected by the mountains, with clay-limestone and clay-sandy soils, this region, which is also one of the oldest wines producing regions in Portugal, brings together unique natural conditions for wine production. To this day foot treading is used and harvesting is done in community, in addition to the use of traditional cork stoppers.

In this way, red wines have complex aromas, ruby colour, and a balanced level of tannins; while white wines are characterized by their citrus colour and their fine and fruity aroma, where tropical fruits and peaches stand out, sometimes combined with floral aromas. 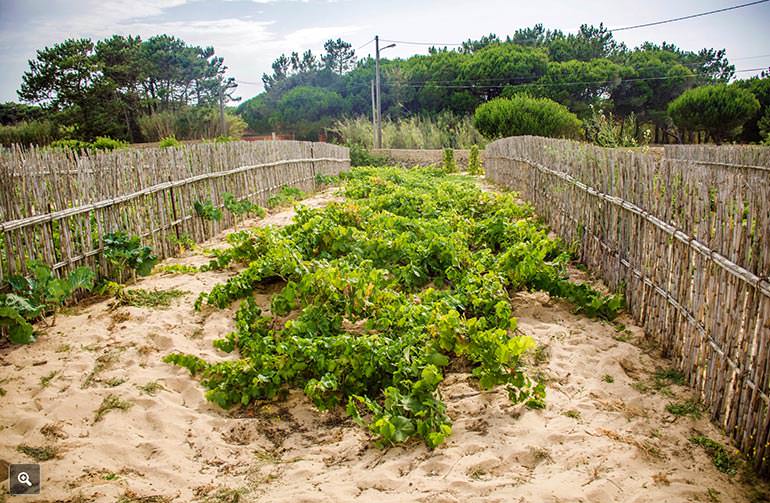 Very close to the Lisbon region but so unique and distinct, are the vineyards that arise from the sand: the vineyards of the wine region of Colares, the westernmost Demarcated region of Continental Europe and the smallest region producing still wines in the country.

Unsure of the year when the cultivation of the Colares vineyard began, we know for sure that in 1154 our first king Afonso Henriques already taxed the inhabitants of Sintra for wine.

But it is already in the middle of the 19th century that these vineyards gain special prominence when phylloxera arrives in Europe, a plague that destroyed most of the vineyards in France, Italy, Portugal and throughout the world. That little insect attacked the vines by the roots. And that is precisely why the Colares vineyards managed to survive: planted in great depth in sandy soil, they were in a very unattractive environment for that animal. The depth of the plantation protects the vineyards from sea winds, salty breezes and humidity. The reduction in production that markedly affected the entire country will have promoted a greater demand for wine from this region. The 1908 Law letter recognizing Colares as a regional wine, was the diploma that created the demarcated region, a heritage of a high degree of rarity, if not unique, in the entire viticultural world.

In addition to being produced in very special microclimate conditions, these wines come from indigenous varieties, that is, existing exclusively in the Region.

The red wine from Colares is still made according to traditional techniques, being composed of about 80% of Ramisco grapes and 20% of other varieties. This wine must be aged for at least 6 to 8 years and has a brown or golden colour, in its flavour there is an aromatic complexity related to dried fruits and red fruits, very pleasant. Its alcohol content rarely exceeds 11.5 degrees. Production is very scarce, not exceeding 20,000 bottles per year.

As for white wine, the variety is Malvasia de Colares which gives rise to wines of citrus colour, fruity and floral aroma and acidic taste characteristic of it. It should be served fresh. The average annual production is around 15 000 bottles, which makes it even scarcer than red. 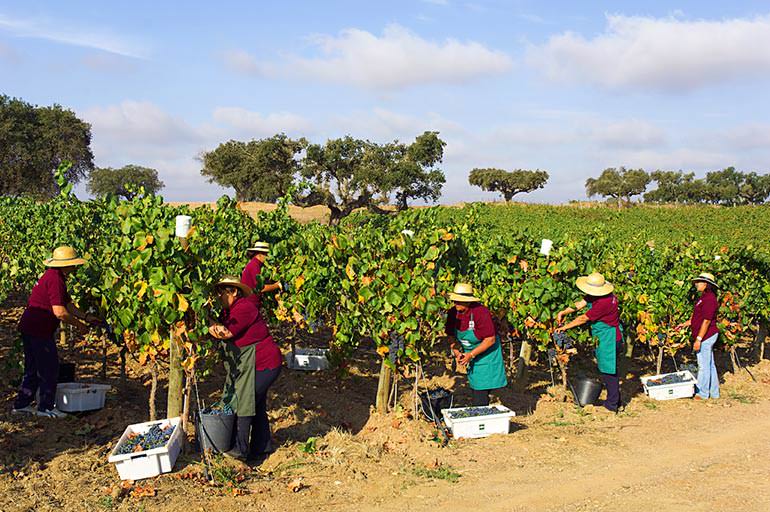 Located to the south and occupying a portion of almost a third of Portugal, the wine region of Alentejo is characterized by its extensive plains, very heterogeneous soils (clay, granite, limestone, or shale), and high levels of sunshine, which result in a perfect rooting of the plants, preserving the natural acidity of the fruit and allowing the grapes to mature and a desirable accumulation of sugars and colouring matter in the skin of the grape.

In this way, it is possible to obtain two qualities of wine: a ruby red wine, warm, balanced, with a slight astringency and aromas of red fruits, and a straw-coloured white wine, full-bodied, balanced and fruity. 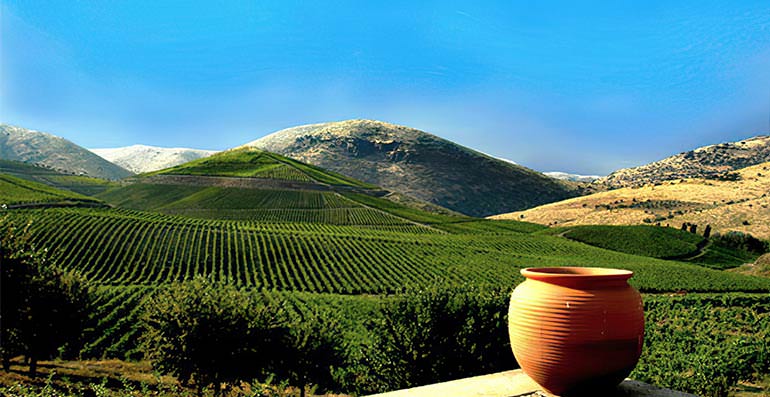 Dão, vineyards in the heart of Portugal

Its name comes from the River Dão, which crosses the region that is surrounded in all directions by mountains, so high that its peaks are covered with snow in winter and presents granitic terrains of low fertility. Mountain ranges condition the climate, sheltering the vines from maritime influence and the direct action of the continental climate. The climate is similar to the region of Toro, Spain, ideal for the cultivation of Tinta Roriz (known there as Tempranillo).

Dão wines have a lot of personality and are usually the result of cuts of different varieties, and of grapes of different altitudes that can vary from two hundred to a thousand meters above the sea, as in Serra da Estrela, joining in a wine several lots of small grapes producers.

White wine is low in alcohol, rich in malic acid and very fruity, while red wine has good aging capacity. 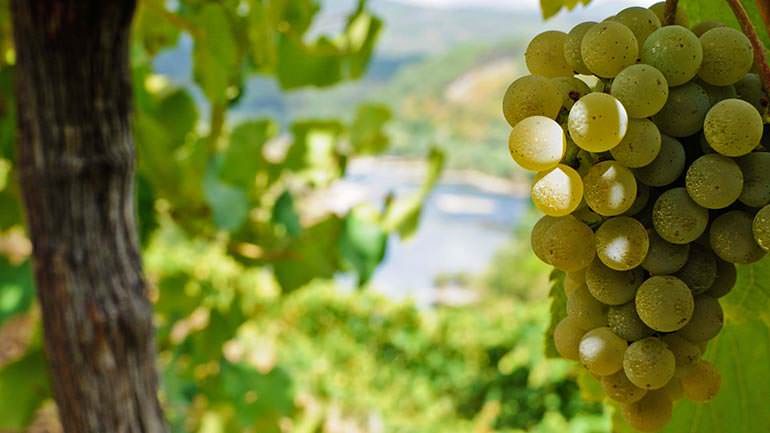 Vinho Verde, wine name and the name given to this region of Minho. It gets its name because of the green vegetation found on the local coasts, which happens due to the cold and rainy climate, influenced by winds that come from both the sea and the north. The fertile and predominantly granite soils that shelter the centuries-old vines are cut by rivers that flow from the mountains. Vinho Verde is the largest producing region in the northwest of the country.

And it is in this densely populated land with abundant soil that the famous Vinho Verde was born. With unique characteristics and native grape varieties, this region prepares an incomparable white wine, being light, young, fresh and aromatic. The drink is suitable for the most varied types of occasion and goes very well with salads, fish, white meats, citrus sauces, vegetables, seafood and sushi.

Outside Portugal it is common to find white Vinho Verde, but in the country red and rosé varieties are the most frequent. In restaurants and among the inhabitants of the region, rosé is the most requested, as it is the perfect combination to accompany typical roasted sardines.

The history of Portuguese winemaking follows a long tradition, conquering a position deserved by the diversity and high quality of its wines. For this reason, and thanks to the great taste of producers and connoisseurs, these specimens have become famous worldwide.

Knowing the main wine regions of Portugal, it is certainly possible to try great labels and take advantage of this opportunity to be in great company!

Share with us which Portuguese wines you have tasted and which you liked best! 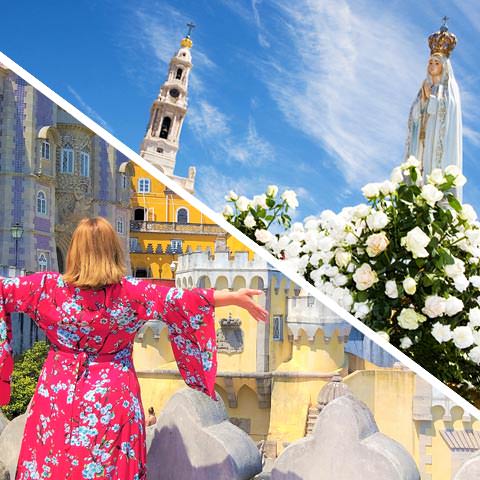 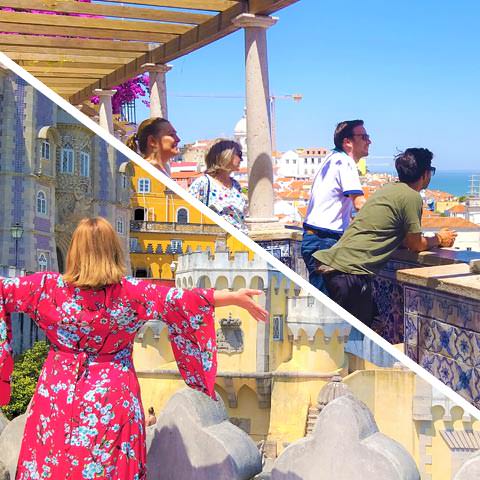 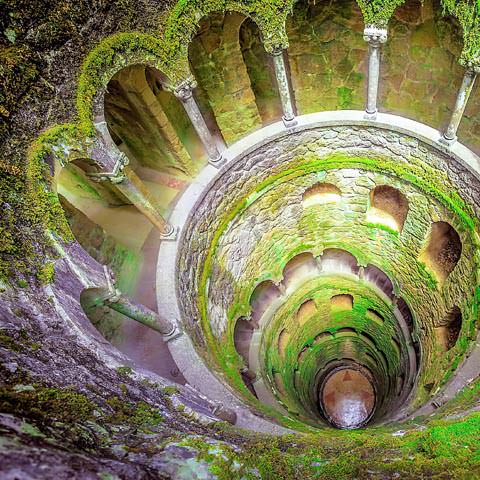 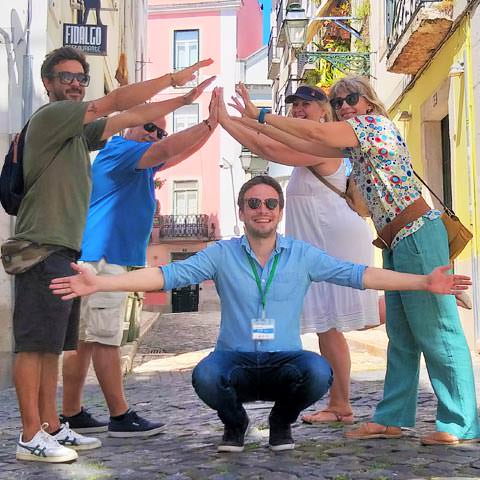